The sight of Lionel Messi and Sergio Ramos as team-mates at Paris Saint-Germain is still taking some getting used to after their many years being bitter foes at Barcelona and Real Madrid.

Indeed, it seems that the two players themselves haven’t let old habits die, with Messi giving Ramos an icy death stare in training after the defender caught him slightly late with a challenge.

On the record, at least, the pair are happy to let bygones be bygones as they link up in the French capital.

“At first, it was weird after so many years of being rivals, being the two captains of Barcelona and Madrid, after so many Clasicos played, so many fights we had on the pitch,” Messi told Marca, shortly after joining Ramos at the Parc des Princes.

“But all that is in the past and we have always respected each other a lot, no matter how much we have been rivals in those Clasicos. Having him as a team-mate today is spectacular.”

Ramos even reportedly offered Messi and his family a place to stay when the Argentinian completed his shock move to the Ligue 1 giants last summer. The centre-back has spoken in the past of his “huge respect” for his long-time rival.

With all that said, the two are fierce competitors and had some fiery clashes when they faced off in El Clasico. Here are five of their most memorable spats.

Jose Mourinho’s first Clasico in charge of Real Madrid was a spectacular one.

Barcelona won 5-0 and treated us to one of the finest displays of football you’re ever likely to see – you can rewatch the whole match on YouTube and we can barely think of a better way to spend two hours.

As well as some wonderful football, the contest was gloriously spicy. Thirteen yellow cards were dished out – five for Barcelona, eight for Real Madrid – and eventually Ramos lost his head completely.

Jeffren (remember him?) had just added the fifth in injury-time and Ramos clearly let his frustration get the better of him, absolutely walloping Messi as the little wizard drove at the defence one more time.

Madrid’s No.4 was given his marching orders and a full-on brawl was sparked between both sets of players, but we’re sure deep down Ramos enjoyed it and has no regrets.

It would’ve surely given Ramos satisfaction to lay one on the attacker that had tormented him all game, and according to former team-mate Jerzy Dudek, he had a personal grudge against the Barcelona icon.

“He was deceptive and provocative, the same as Barcelona and Pep Guardiola,” Dudek wrote in his autobiography.

“They were so ready to provoke you and they were able to do it to perfection. That hurt Jose Mourinho and the whole team a lot.

“I saw Messi say such rude things to Pepe and [Sergio] Ramos that you would not imagine from such a quiet and seemingly good person.”

We miss when El Clasico was this feisty. 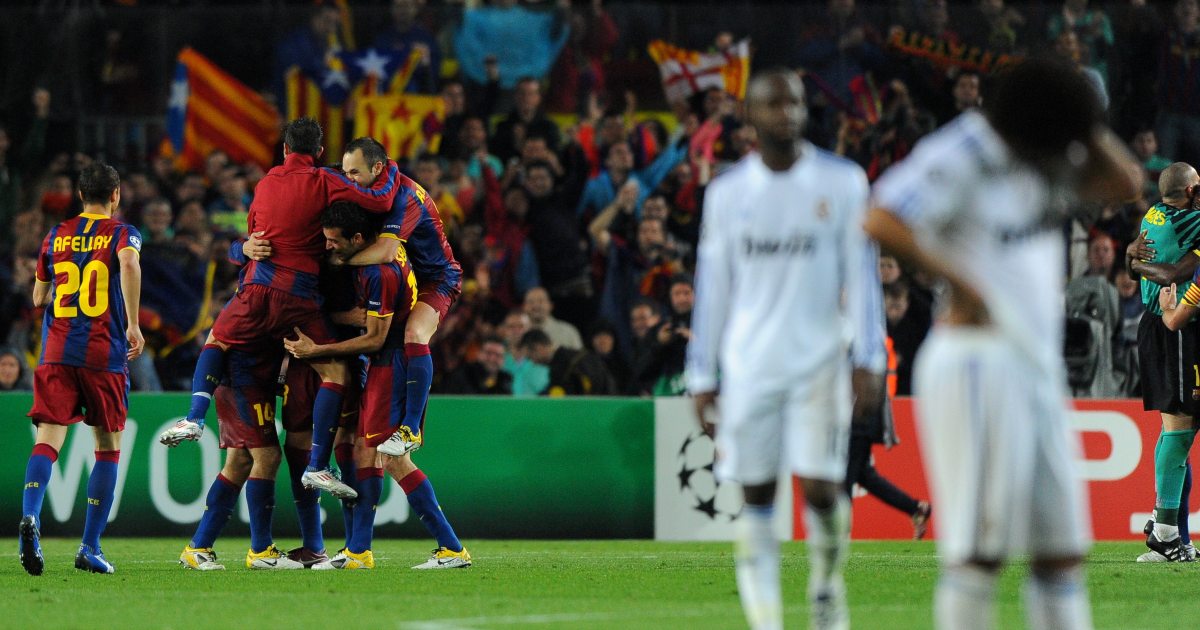 Ramos has received no fewer than 27 red cards in his senior career, five of which came in El Clasico.

He’s received another five since this one, but this was his last against Barcelona – and one he can surely have no complaints about after a two-footed lunge on Messi.

The Argentinian picked himself and dusted himself off and 15 minutes later scored one of his greatest goals with a last-minute winner in a 3-2 victory for Barcelona at the Bernabeu. Classic Clasico stuff, that.

If you want seven seconds that capture the pure essence of Sergio Ramos, this is it.

No player linked up as well with Messi on the pitch as Luis Suarez, and the pair are close friends off it, so it was no surprise to see Messi look for revenge when Ramos gave the Uruguayan strike a sneaky dig in the ribs.

The Madrid centre-half and Suarez were each shown bookings for their scuffle, and a few minutes later Messi joined them in the referee’s book for a late challenge on Ramos.

We were expecting to write “he knew exactly what he was doing there” to lots of Ramos shithousery, but here’s a rare occasion where it applies to Messi.

“Only Sergio Ramos knows if he meant that elbow on Messi,” said the Premier Sports commentator as a replay showed the Blancos captain catching Messi with a flailing arm. A fair few Barcelona fans might disagree with that assessment.

Messi was fuming and butted heads with Ramos before showing the referee his bloody lip, but VAR took no action. Jose Mourinho was in the beIN Sports studio as a pundit and gave his two cents on the incident.

“He probably does it with the intention of creating a different temperature for the second half because the game until now was really soft,” the former Real Madrid manager said.

It failed to have that desired effect, with Barcelona fairly comfortably seeing out their 1-0 lead.

One of the biggest talking points of the half was this collision between Ramos and Messi on the stroke of half time! Ramos faced no repercussions.

‘I won 10-0’: When Michael Laudrup ruled El Clasico for Barca and Real

Can you name every player to score in El Clasico in the 2010s?

Where are they now? Real Madrid’s XI from Sergio Ramos’ debut in 2005

The 5 players with the most assists for Lionel Messi goals: Suarez, Xavi…