Everyone is crazy about the acting and romance of the King of Bollywood i.e. Shah Rukh Khan. His every film still rules the hearts of the fans. At the same time, fans are often eager to see Shahrukh’s chemistry with actress Kajol. Meanwhile, a video of Shah Rukh Khan’s film Duplicate is going viral, in which Kajol’s cameo is making fans laugh. At the same time, on social media, fans have started praising Shahrukh’s acting once again. Although some people are not stopping laughing after watching the viral video.

Talking about the viral video on social media, Kajol did a cameo in actor Shah Rukh Khan’s film Duplicate. A scene of the same is going viral, in which Shah Rukh is seen saying, “Tujhe jaana hai to ja, dekhana main bhi na khana khaunga na virgis karunga and seeing a dirty girl, I will marry her.”

Meanwhile, Shahrukh sees Kajol and says sister you will marry me. On this, Kajol is seen saying, Shit… never and is seen raising her voice to Raj. 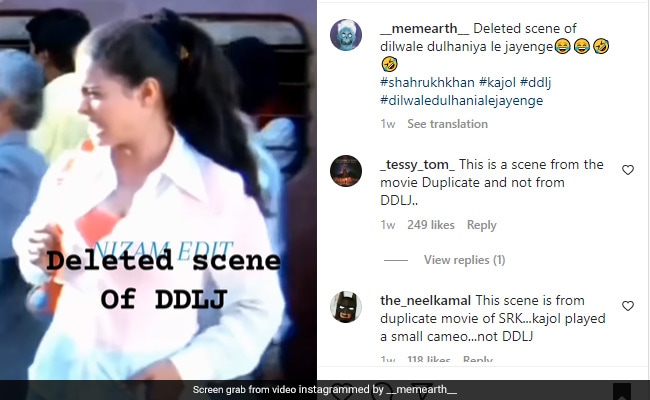 Let me tell you, this is not a scene from the film Dilwale Dulhania Le Jayenge, but a scene from Shah Rukh Khan’s film Duplicate, in which Kajol was seen doing a cameo as Simran. Fans are seen laughing fiercely on this video of the actor. While sharing your reaction in the comment. One user wrote in the comment, thank god they deleted this scene.

22 hours ago
Trending Now
Back to top button
Close
Close